WELCOME TO THE KINGDOM OF JHVH

JHVH ("Jehovah") is an electro-pop singer, songwriter, and performer based in New York City. Adopting a name of Biblical proportion, JHVH challenges himself with aspirational productions and performances, seeking a transcendent musicality.

His productions often pair sweeping orchestral inspirations and swirling electronic pulses with a deeply emotional overtone. JHVH cites a wide variety of influences from Britney Spears to Björk, Courtney Love to Charli XCX, and Tori Amos to Tchaikovsky. While pursuing a Visual Arts degree in Tokyo, Japan, he immersed himself in the world of J-pop and K-pop artists such as Ayumi Hamasaki, Utada Hikaru, BoA, and Perfume—influences apparent in his craft. His experience studying piano in his youth inspires him to compose stunning piano arrangements in his original music, as well as create heartfelt piano renditions of popular songs.

With an audience of almost 7,500 followers across all platforms and streaming analytics up 140% thanks to features on curated Spotify playlists, JHVH has been consistently building a dedicated fanbase. JHVH was recently featured on Samarecarm’s debut Twitch event, which raised $800 for the AAPI community in support of #StopAsianHate. JHVH also made his radio debut in July on WGXC Radio 90.7 FM’s Mystery Machine, a monthly show featuring new and emerging artists.

Over the past two years, JHVH has positioned himself as a community builder and advocate for emerging LGBTQ+ musicians with his “SUPPORT QUEER ARTISTS” monthly playlist, becoming a prominent curator within the online community. Identifying as queer/nonbinary, JHVH boldly explores gender in his imagery and writes songs that speak to the queer experience. JHVH is a proud advocate for his community and aims to be a prominent voice for LGBTQ+ youth. With 10 years of music production and vocal training under his belt, he is primed for making waves in the industry. 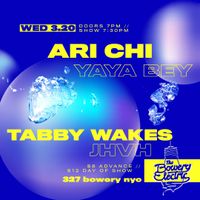 Join us for a night with Ari Chi, Yaya Bey and Tabby Wakes, with tunes and more from JHVH! 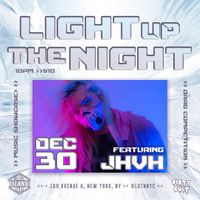 Light Up the Night ft. JHVH

LUTN returns to the LES' hottest new venue, Coney Island Baby, on Sunday, December 30th with a live music showcase, dance party, and our all-new drag competition, Drag Me. The theme for the night is ICY WINTER WONDERLAND, so make sure to turn out your ICIEST l00kz! Come out and party with us! Doors open @ 10pm

About us: A LGBTQ Dance Party Produced by Queen Sessi, Miss Vanity Q & Tara Byte. We are one of the hottest Dance Parties in the Lower East Side featuring New York's best Musicians, Drag Queens, Host & Performers. Since 2017, LUTN Provides Artists on all levels a Live Performance Platform to showcase their talents amongst hundreds of people at various renowned NYC & Brooklyn venues. A perfect place where "Queer Meets Art". A judgement free zone dance party filled with good vibes and good times.

SOUNDS FROM THE KINGDOM